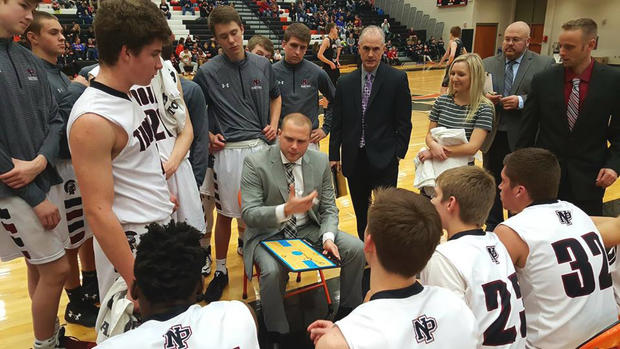 If anyone was destined to be a head high school coach in the state of Minnesota, Coach Tesdahl of New Prague High School, would have to be that guy. It is almost as if the basketball gods created the Tesdahl family to solely be coaches. The patriarch of the coaching tree starts with Tesdahl’s Grandpa, Bob McDonald.  From Coach McDonald you can branch off any direction of the family tree and find coaches throughout the family. Bryce happens to be one of the youngest members of the McDonald/Tesdahl coaching tree. With years of learning from his Gpa, Mom, Dad, Uncles and Aunts, it is no surprise the early success Bryce has had.

In his two short years leading the New Prague program he has taken his boys to new heights. With back-to-back 20 win seasons, appearances in the sectional tournament and the 1st ever top ten rating at the 4A level, the leadership Tesdahl has displayed is making the Trojans a force to be reckoned with. As he continues to develop the culture of the program, he has his sites set on making a state tournament run in the coming years.

The conversation I had with Bryce went in a multitude of directions with highlights including:

Coach Tesdahl (@CoachTesdahl), is entering his eighth summer of directing camps for Midwest Elite Basketball. He is currently the Head Boys Coach at New Prague High School in New Prague, Minnesota. Tesdahl was an NSIC All-Conference point guard at Bemidji State University from 2008-2012. He set a NSIC single-season record with 173 assists his senior season. After his playing career he moved on to the University of Minnesota Duluth as a Graduate Assistant. Coach Tesdahl was in Duluth for three seasons, during his tenure he helped the UMD program increase their win total from 8 to 12 to 16.

“Tessie” as he is called by his friends and TeamMEB members, is the co-owner of MEB-Minnesota. His basketball roots run deep in the state. He is the grandson of the legendary high school coach, Bob McDonald. Coach McDonald coached for 59 years at Chisholm High School, compiling 1,012 wins. His mother was the Head Coach for the Crosby-Ironton girls basketball team, his father is currently an assistant for Crosby-Ironton boys team, his brother Brock is an assistant at Hopkins High School, and he has several uncles and cousins coaching at various levels.

Coach Tesdahl led his New Prague program to a 20-8 season in his inaugural season. This included a Wright County East Conference Title. This season his team finished 20-8 and were boasting an undefeated record at 12-0. They garnered state wide attention when they cracked the top ten rankings for the 4A level, a first in the programs history. With multiple players moving on the 4-year collegiate level, this year was by far the most successful in the Trojans history.

Carrying on the Family Legacy