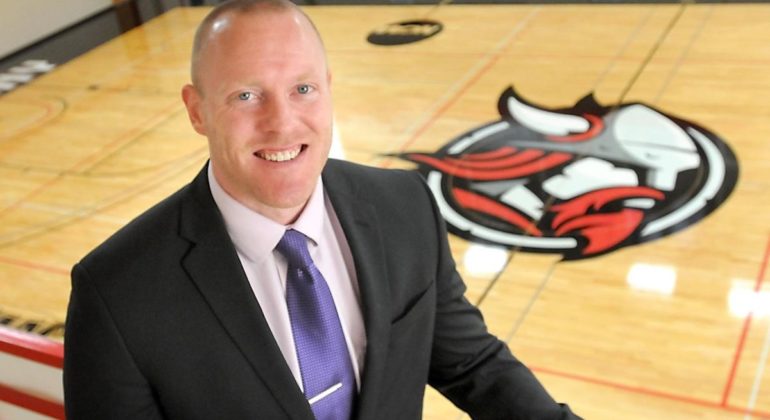 Growing up with coaching in his blood it only seems right that Matt Fletcher is now leading his own college basketball program. Fletcher’s trajectory in the hoops world all started during his youth watching his dad coach at NDSU (North Dakota State University). Developing a passion for working on his game started by emulating the players who played for his dad.  Challenging them to games of “Pig” or “Horse” after a big performance. Taking his internal drive back to the Fletcher home, Matt’s game was honed on his hoop in his driveway. Putting in countless hours wearing the rubber off of camp basketballs were the first signs of Fletcher’s self motivation.

Fletcher describes himself as a “juice man” when it comes to running his Bethany Lutheran College (BLC) program and how he approaches his own life. To understand where this drive comes from, we had to journey back to a young baller growing up in Minnesota. From graduating North Branch High School as the all-time leading scorer, to his playing career at Southwest Minnesota State and where he is today as the head coach at Bethany Lutheran College, each memory, success and failure shaped Matt into the coach and person he is.

The gems included in this podcast are too many to highlight:

Coach Matt Fletcher (@mattnfletch22), is the head men’s basketball coach at Bethany Lutheran College (BLC) in Mankato, MN. Bethany Lutheran is a NCAA Division III program who competes in the Upper Midwest Athletic Conference (UMAC). Coach Fletcher is in his first season leading the Vikings program. Before taking over the BLC program, Fletcher spent the previous three seasons working with Coach Brooks McKowen at Upper Iowa University in the Northern Sun Conference (NCAA Division II). Working his way to becoming a head coach was a goal Fletcher had since his first position at Concordia College under Coach Rich Glas.

Immediately after Matt’s playing career ended at Southwest Minnesota State there was no decision of what career path he would be following. After all, basketball and coaching were in his blood. Taking an assistant position with Coach Glas at Concordia College was the first spot to start honing his craft. After one season at the college level, Matt had an opportunity to take over the South St. Paul boys basketball team, a 4A program in the state of Minnesota.  At the age of 23 it made him the youngest head coach at the 4A level. “The opportunity I had at South St. Paul made me the coach I am today. Learning how to motivate kids who played because their buddies played or because it was the thing to do in the winter, made me appreciate everything but the winning.”  As a high school coach, Fletcher learned the importance of organization, time management and how to appreciate the process over the results. All characteristics embedded in him now as a head coach at the collegiate level.

The second biggest influence in Fletcher’s development was his time spent at Upper Iowa University as the lead assistant and eventually the associate head coach. Working under head coach, Brooks McKowen, they took the Peacock program to new heights within the Northern Sun Conference. Finishing fourth in the south division for three straight seasons was an accomplishment all programs would be thrilled about. Why they had such success came from the mentality of doing your work at a high level, but on your own schedule. Working in chucks of time, maintaining your own schedule and bringing energy to your daily tasks, were all ingrained during Fletcher’s tenure as an assistant.

Now leading his own program, the lessons Matt has garnered from the coaches he has worked for, worked with and developed on his own, are all being imparted on his players. The perfect quote from Fletcher on how his team buy-in and leadership has changed is, “You can’t get diet advice from a guy who eats at McDonald’s everyday. Getting on guys and having high expectations can only be enforced if you are the player or coach setting the example. ” As he sees the expectations change with his players he knows they can still have more “buy-in” to the process. Whether it comes with 4 AM lifting sessions, rowing the boat on the bench during games or driving 2.5 hours to be in attendance at Coach Fletcher’s high school hall of fame induction, the Viking players/program are making moves in the UMAC.  “It is a privilege, not a right to a be a college basketball player. My guys understand this and cherish the opportunity they have.”

“You can recognize greatness at any level. I am striving to make our program at BLC one of those programs.”