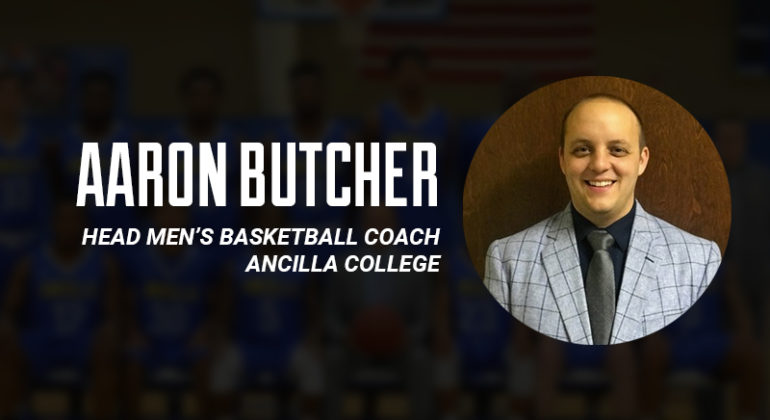 “Started from the bottom now we here.” The famous mantra from Drake, fits the men’s basketball program at Ancilla College well. Upon Coach Butcher taking the program over six seasons ago the program hadn’t tasted much success in the school’s history. Since the takeover, Coach Butcher has compiled a 100-63 overall record, led the team to it’s highest ever national ranking at #2 in NJCAA Division II and is becoming a regular in post season play. How did a former player of this program take it from the bottom of the Michigan Community College Athletic Association to the top?

The details of this dramatic program turnaround are explained by the guy who took them to this new level. It was a pleasure for me to sit down with Coach Butcher and hear about what he did to get the Charger program to the mountain and how they are striving to stay there. Highlights of this podcast include:

Coach Aaron Butcher (@CoachButcher) is in his sixth year as the head men’s basketball coach at Ancilla College. He is the first coach in the program’s history to be a former player and now the head coach. In his six seasons he has put together quite the resume. With 100 career wins, multiple post season appearances and a current NJCAA D2 national ranking of #2, it is easy to say the Chargers program is becoming a premiere destination for players. At the time of this recording the Chargers are currently 17-1 overall and undefeated in league play.

Coach Butcher started his college coaching career as an assistant coach for NAIA powerhouse, Indiana Wesleyan. All three seasons on staff the program played in the NAIA National Tournament, finishing in the Elite Eight two different times. Along with his coaching positions, Coach Butcher has worked basketball camps across the Midwest and was an AAU coach for the Spiece Indy Heat.