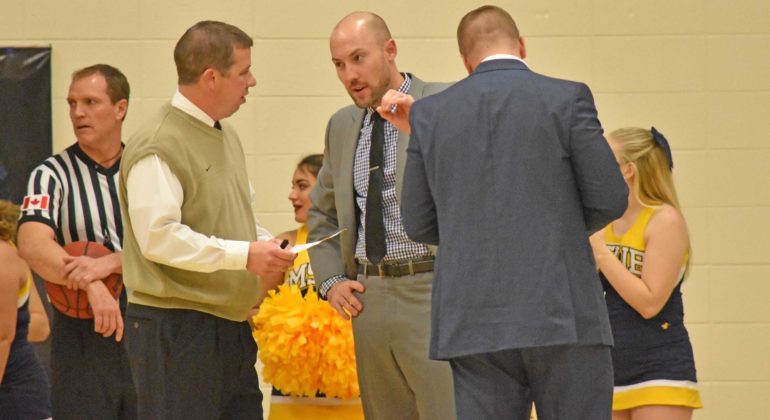 For this first episode of the 2017-2018 college basketball season the MEB operations team thought it would be fun to flip the script and have someone interview me.  MEB Co-Owner, Craig Doty, is the guest host for this special edition of the podcast. There is a very different feel to this episode with a new voice leading the question asking and having the regular host responding. Hopefully everyone enjoys hearing a little bit of my personal background and story. It should provide a personal relationship with me moving forward as we continue the MEB podcast.

Coach Brad Schmit (@Coach_Schmit), is currently in his sixth season coaching the Montana State University Billings men’s basketball team. During those six seasons, Schmit spent one season as a volunteer assistant, four seasons as the lead assistant and now holds the title of associate head coach. During his time as a Yellowjacket, the program has maintained a quality level of play in the competitive GNAC. 3 out of 5 seasons the team has qualified for the conference tournament (top 6 out of 11 qualify), fielded multiple all-conference players and is now off to the best start in over 15 years with a record of 5-0.

Schmit made his journey to MSUB after 10 seasons playing and coaching for his alma mater, Morningside College. The time spent coaching the program he helped build as a player was a very rewarding time in his career. The Mustangs reached new heights during his tenure as a player and coach. Schmit compiled a 193-126 record (117-73 as a coach) including three NAIA National Tournament appearances, three Great Plains Athletic Conference (GPAC) titles and a GPAC Conference Championship.  All of the accolades Schmit earned as a player led him to be inducted into the 2017 Mside Hall of Fame.

Away from basketball Schmit has a variety of hobbies all tailored to being outdoors. He is passionate about mountain living and enjoys his time snowboarding, hiking and exploring the amazing landscape of Montana. Ideally these activities include his two favorite people, his beautiful wife Jacque and his son 18 month old son Preston.