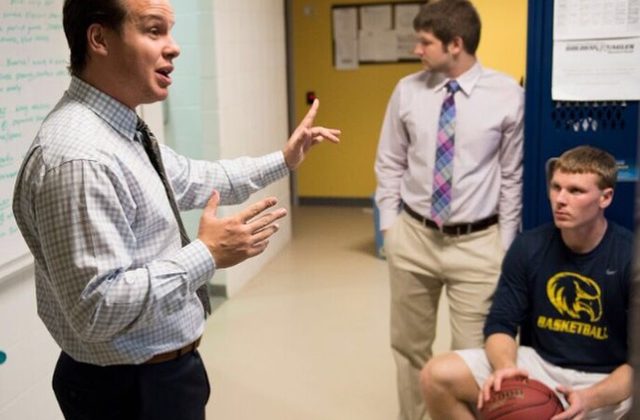 Skill development is a small component of a college basketball program, but one area that is rapidly growing. NCAA Division I programs have started having a “Director of Player Development” on staff and lower levels are starting to enhance the workouts they are doing with their players.Almost every single NBA player has their own “skill instructor” and a quick Google search will provide you with countless videos on how to dribble, pass and shoot.

With the amount of information out there it would be very easy to get overwhelmed by the content available and not know which drills to even do. A big takeaway from this short interview is to “Cut the Fluff” from workouts and keep things “Vanilla”.

In this episode of the MEB podcast I sat down with Coach Evan Lavery to talk specifically about the skill work he does with his players. This is an area of his program that Coach Lavery has always been passionate about and constantly seeks to improve. I know I will be taking things from this interview and implementing them with my own players. Some highlights from our conversation include:

Coach Evan Lavery, is entering his second season at the helm of the Rock Valley College Golden Eagle men’s basketball program. Being the head coach at RVC is still fresh for Coach Lavery, but the program as a whole has his hand prints all over it. Before taking over as the head coach, Lavery spent three years as an assistant coach. During this time all the Golden Eagle’s have done is win. With an overall winning percentage of .845, 2 National Titles and a list of guys who have moved on to the four year level, it is safe to say the RVC men’s basketball program is one of the best junior college programs in the country.

Only heading into his sixth year as a college coach at the ripe young age of 29, the coaching trajectory for Coach Lavery has been a fast one. Focusing on developing his athletes in all areas of their lives is one of the main selling points for his early success. The players who are a part of the Golden Eagle men’s basketball program get a chance to develop as players and young men before making the jump to the four year level. “We’ve had a lot of four year coaches on campus already this fall and they all comment on how organized we are. Running our program like a four year program is one of the main factors to our success.”

Before taking over as the head coach at RVC, Lavery spent three years as assistant under Coach Craig Doty. Lavery played his college ball at Kishwaukee College for two years before finishing his career at Central Methodist University.