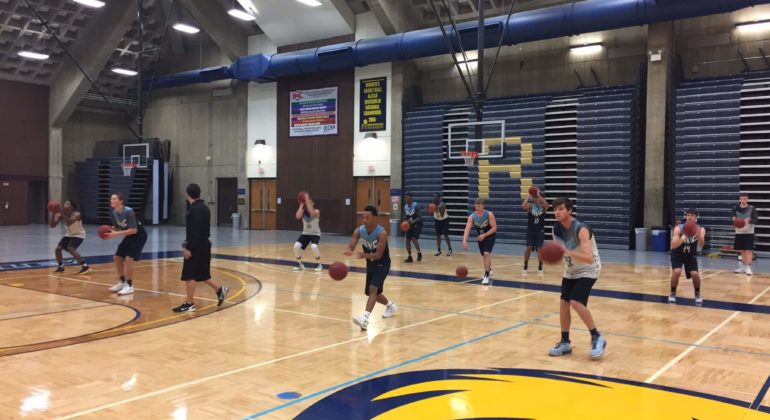 Flash back to the beginning of November. Players are excited to get started practicing, coaches are amped to be able to work with their team, and there is a sense of urgency throughout the entire program to maximize potential on this yearâ€™s team. Unfortunately, those days are long gone, and there is a greater task at hand: winning championships. Cutting down the nets is a unique feeling that players, coaches, and communities remember for years to come. Earning the privilege to win happens days, weeks, months, and even years in advance. Although your teamâ€™s foundation has been set, do not underestimate the value of late season practices.

Practices late in the season are much different in duration and structure from practices early in the season. Practices in November and December are longer, more physical, and can be very mentally draining; practices in mid-to-late February into March are much different. Practices late in the season need to be executed at a high intensity level with the intent to get in, get practice objectives accomplished successfully, and get out. This helps keep players fresh, and to a certain degree, helps prevent injury. As a coach looks at their upcoming schedule, it is important to identify opponentâ€™s strengths and weaknesses; those points need to be addressed and worked on during practice in order for game carry over to occur. Does the opponent use ball screens well? Do they push the ball hard in transition? Do they overplay passing lanes? These are some of the many things that as a coach, you must ask yourself when evaluating future opponents. Practices late in the season need to emphasize your core philosophies and teaching points within the frame work of your team (the things you have worked on since practice #1) to exploit/neutralize your opponent.

In addition to prepping for opponents, the following are a few things you can incorporate to your practices late in the season to keep your team on the rise:

1) Player Development â€“ As much as live action (competitive drills, game situations, etc.) is important, it is essential to continue with player development. Shooting, ball handling, passing, and footwork to name a few, are elements that need to be worked on EVERY SINGLE DAY. A very successful coach once addressed a camp, â€œIf you donâ€™t feed your dog, what happens to it?â€ As simple as this may seem, the same applies to your skill set as a basketball player. In addition, player development must be done at game speed. Players need to have the confidence to execute the fundamentals in order to win; the confidence comes through proper preparation!

2) Film Sessions â€“ Watching film of both yourself and opponents can be very beneficial late in the season. Film sessions are a great way to help get your players off their feet, take mental repetitions of what they do, and what their opponents do. Film needs to be used to encourage positive behaviors, and explain why the negatives do not help the team. Be careful in your choice of words to your players so that instead of shutting down during film out of embarrassment, they come to the realization of what they did or did not do well, and be accountable and prepared in future games.

3) Mental Exercises â€“ Former head coach Bobby Knight has a famous quote: â€œMental toughness is to physical as four is to one.â€ Athletes, we need to train their minds as well as their bodies. In order to maximize potential, athletes need to maintain a solid balance of physical and mental skills. The player that has all the physical tools, but no mental toughness can certainly be stopped. Positive self-talk, self-acceptance, and visualization techniques are all skills that need to be practiced in order to maximize mental capacities. Games present mental challenges (overcoming fatigue, ignoring critics, etc.) every single night. Learning to fight through these barriers is not only a game skill, but a life skill as well.

As coaches, we all know that a basketball season has its peaks and valleys. All coaches in all sports want to be peaking at the end of the season when it is tournament time. In order to peak, as a coaching staff, it is vital to be smart, detailed, and enthusiastic during practices at the end of the season. It is up to you to get your players moving in a unified direction down the stretch when it matters most; this starts on the practice court.