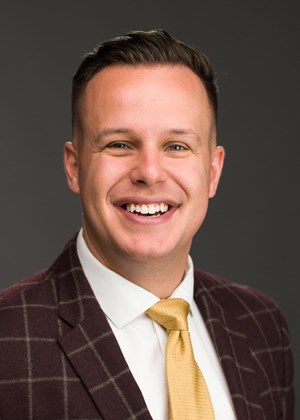 Evan Lavery will begin his third year as assistant coach at Emporia State, but he is no stranger to head coach Craig Doty. The pair helped build Rock Valley College into a national power in the NJCAA and reunited after Lavery spent two seasons as the head coach of the Golden Eagles. Lavery is involved in all areas of the program. The Hornets ranked third in field goal defense (.434) in the MIAA in 2019-20. Lavery was also instrumental in the recruitment and development of all-MIAA selections Brenden Van Dyke (2020), Kooper Glick (2019), and Julius Jackson (2019).

Lavery helped build and maintain Rock Valley College in an NJCAA National Powerhouse. Since his arrival in 2013, the Golden Eagles have a 144-27 (.842) record, have made three trips to the NJCAA DIII National Tournament, and won two NJCAA National Championships. The 2017-18 team posted 27 wins – the 4th highest single-season total in the 53-year history of the program.

Last season marked the fifth consecutive year where Rock Valley College men’s basketball finished the season with at least 23 wins. The Golden Eagles also spent all 12 national polls ranked in the NJCAA DIII Top 10, the fourth consecutive season the Golden Eagles spent the entire year nationally ranked from start to finish, climbing as high as #2 overall. RVC posted a 12-3 (.800) record against NJCAA D1 & D2 opponents, including an 87-75 win over #2 NJCAA DII Triton College. In the midst of their season-high 14-game winning streak, Lavery was named Hoopdirt Junior College National Coach of the Week. The Golden Eagles took down 3 NJCAA D1 opponents, all on the road.

In 2016-17, despite RVC losing seven players to graduation, including two All-Americans and four starters, Lavery signed eight recruits and developed players who were role players as freshman into feature players as sophomores. Lavery would lead the Golden Eagles to a 23-9 (.719) record in his first season as head coach which is the highest first year win total for any head coach in the 52 year history of Rock Valley men’s basketball. Lavery led Rock Valley College to the Region IV Championship Game while playing one of the toughest schedules in the county which included playing 17 NJCAA D1 & D2 opponents and 15 NJCAA D3 programs. In the classroom, the Men’s Basketball program was recognized by the NJCAA, earning “Team of The Year” honors for their 3.11 team GPA for the 2016-17 academic year. Over two semesters, 13 total members of the Golden Eagle roster made the Dean’s List (3.25+ GPA). In addition, sophomores Dalton Menke and Alec Pena earned Academic All-American honors.

In Lavery’s time on staff as an assistant, he played an integral role in all aspects of the Golden Eagles men’s basketball program with a focus on recruiting, player development, defense, zone offense, out-of-bounds sets, strength and conditioning, and game preparation. Lavery was also instrumental in the development of All-Americans Jared Mayes (NJCAA National Player of The Year in 2014, 1st Team selection in 2015), LT Davis (NJCAA National Player of The Year 2016), and Elijah Williams (2nd Team selection in 2016). In five years, the Golden Eagles have produced 11 All-Region IV players, 11 All-Conference Players, 4 NJCAA All-Americans, and 2 NJCAA National Players of the Year.

In 2015-16, the Golden Eagles were ranked #1 in NJCAA Division III all year long for the second consecutive season. The Golden Eagles would avenge a three-point loss to Richland College (Dallas, TX) in the previous year’s title game allowing RVC to win two National Championships in three seasons. En route to their National Title, RVC won their six post-season games by an average margin of victory of 21.3 points per game. For a third straight season, Rock Valley broke the single-season record for victories, posting a 33-3 record. The Golden Eagles started the season off 19-0 which is the best start in school-history. RVC knocked off two NJCAA D1 opponents who were nationally ranked, both of who made the NJCAA D1 tournament in Hutchinson this season. The Golden Eagles took down #6 Vincennes (IN) on the road to start the season off and the following weekend defeated #7 Indian Hills (IA) on the road.

In 2014-15 the Golden Eagles were ranked #1 in NJCAA Division III from the pre-season national poll until the final poll. Along the way, RVC broke the school record for wins going 31-4 on the season. Rock Valley played in the NJCAA Division III National Championship game in Loch Sheldrake, New York for the second year in a row. Additionally, the Golden Eagles won the N4C Conference and the Region IV/District 2 championship.

In his first season at RVC, Lavery assisted the Golden Eagles to the NJCAA DIII National Championship. In charge of team defense, opponent scouting, and and game preparation, RVC was ranked #13 in the country in defensive FG% (40.2) and 14th in the nation in defensive 3PT% (29.7%). In the national tournament semifinal game against defending national champion Brookdale CC, NJ (30-1), RVC held the Jersey Blues to a dismal 31.1%. In the National Championship game, Rock Valley College held Caldwell Tech, NC (29-6) to 22-65 from the field for a chilly 33.8%.

Lavery joined RVC following a one-year stint as an Assistant Men’s Basketball Coach at NCAA Division III Rockford University (IL). While at RU, Lavery was in charge of monitoring academics, on-campus visits, and assisted in recruiting.

Lavery played two years at NJCAA Kishwaukee College in Malta, Illinois where he was a two-year starter and captain. In his sophomore season, he helped lead the Kougars to a 6th place finish at the 2010 NJCAA DII National Tournament. Lavery went on to finish his playing career at Central Methodist University in Fayette, Missouri. A native of Dyer, Indiana, Lavery graduated from Lake Central High School in 2007. In his prep career, he was named an all-area selection by both the Northwest Indiana Times and the Post-Tribune.